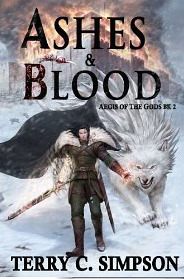 A big congratulations to my fellow Alexandria Publishing Group author Terry Simpson on the release of his new novel, Ashes and Blood.

Ashes and Blood is an exciting epic fantasy, book 2 of his Aegis of the Gods series. Here’s a quick synopsis:

Ancel Dorn has gained the first of his power. And now he’s a wanted man.

Ryne Waldron wants to teach him. The Nine want him to be taught before they kill him. Galiana Calestis wants him to live, and learn, and hopefully accomplish what she never was able to do: save their people. Irmina Nagel wants to love him again. Stefan Dorn, his father, wants him to lead and pave his own path.

The Tribunal and the shade want him dead.

All he wishes is to save his mother if she lives; rescue his father from the Tribunal’s clutches; find love again; help his people. And to learn how to harness his power before it drives him mad or kills him.

Cities will burn. The innocent will die. The dead shall rise. Nightmares will stalk the land. Guardians will wreak havoc.

Can he, Irmina, Galiana, and Ryne help to stem the tide? If so, at what cost?

What’s even more impressive is that Terry was able to get it finalised and released while dealing with the impact of Hurricane Sandy.

All the best to Terry – hope it is a massive success.