Behind The Highly Capable – guest post by Jayme Beddingfield

It’s always a pleasure to have a guest visit. Today I’m pleased to play host to Jayme Beddingfield as part of her Highly Capable blog tour, taking about how she generated the ideas behind her story. So take it away Jayme.

Behind The Highly Capable 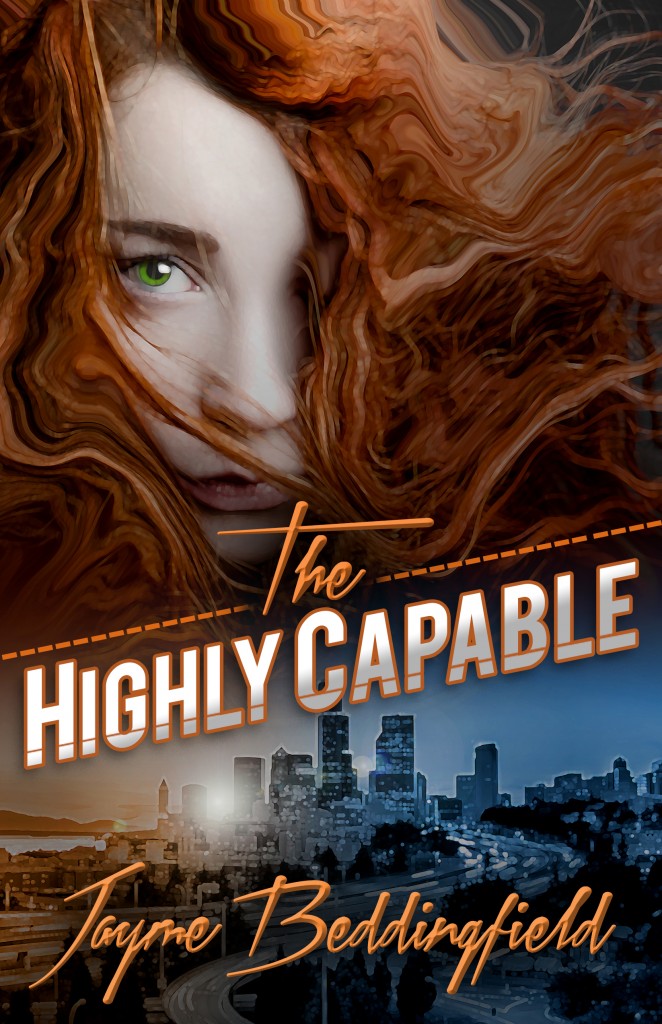 My ideas usually trickle in over time; some are more monumental than others. My creation of The Highly Capable was no different. Ruby Dawson, the telekinetic protagonist, was the first part of the story that occurred to me. I was actively writing an entirely separate story when I began picturing a female with wild red, long curly hair. Slowly as her character expanded so did the world around them.

These characters didn’t originally have any powers at all. The relationships and homeless teen aspects were there, but Ruby wasn’t telekinetic, and Madison didn’t conjure and control fire and so on—that whole element just wasn’t there completely. The working title at the time was, Here in Emerald City. I got about halfway through the first draft, one day I looked away feeling lost. I had read back what I had so far of the story, and I just couldn’t escape that there was some major component missing. That was a big moment for me. This was, close to six years ago, and I wasn’t outlining beforehand yet. I knew I had to finish this story. I put it down for three months and did two things: tried to consume as many different stories as possible and read up outlining and story arc building. I started reading a lot of comic books (Mostly Spiderman, Batman, and X-Men) and it hit me that my characters had powers. I went back to my notebooks and previous version and outlined my new concept following a five-point story arc. Adding powers to the story fit like the ideal pair of jeans.

Shortly after the realization, I had all my character and story arcs written down. My characters had key goals, and I now had a new world of super powers to get lost in. It was important to me to incorporate Seattle as much as possible as a visible and present setting. I think the city lends itself well to the mix of reality and supernatural in the story. During the early stages of writing the story, I often would walk through the city and different things I’d see would make me think of Ruby and the others, that’s usually how certain parts of the city made their way in. I’m currently doing the same for book 2 of The Ruby Dawson Saga. New York is often present in stories like this. Every city has dark corners and bits of characters that are begging to be painted with pen ink. I also know I didn’t want to make the city fictitious. It was important to have aspects of the story stay grounded in reality and be centered around extraordinary abilities since the theme of the story itself is about the qualities and strength with-in people, and relationships. Ruby’s encounter with more innocent regulars provides an impetus for escape from her stressful life. But more than that, she struggles with leaving the positive seeds within her dark community.

Since I was already familiar with the characters, I chose the powers that I thought would reflect their personality traits. Ruby before I gave her powers she had issues over controlling aspects of her life and often got in her own way when it came to making the right decisions. Madison’s temper and quick trigger pointed me in the direction of fire. Madison’s impact on Ruby’s world and really the city itself is harsh and chaotic, and it is something that grows. I gave Tristan the talent of invisibility due to his self-destructive nature.

I often think of story creation like a digging for treasure. Not every idea is going to be golden or even that one that’s searched for, but over time enough pieces come together to make something pretty special.

Jayme Beddingfield has been crafting stories since her third-grade assignment to write her own fairy tale. She prefers to work from the sofa with her dogs by her feet. Originally from Northern New Jersey she now lives in Seattle, the city of her dreams. She lives with her husband, two children, and a slew of adopted pets.

What would you if you could control objects with your mind?

Would you be able to choose between right and wrong?

Nineteen year old Ruby Dawson was born with the powers to move things with her mind. She thought she was the only one of her kind until she met Tristan- a self-destructive drug addict and a crew of super-powered thieves. Working in the shadows, the crew follows their fire conjuring leader, Madison, as they descend further and further into the world of organized crime.

Ruby finds herself in a whirlwind of wrong decisions, lies, murder, and realizations she isn’t ready face. As Ruby watches Tristan disappear further into his drug addiction and her team fight for more money and territory, she struggles with who she has become. Can Ruby walk away from the closest thing she has to a family and be the hero she is actually meant to be?

The Highly Capable- Volume One of the Ruby Dawson Saga, an urban fantasy, is a tormenting and emotional tale of self-discovery.

– Available on Amazon.com in Kindle and paperback versions Amazon

– Available on BarnesandNoble.com in Nook and paperback versions Barnes and Noble

– Remember – you can always read for free on www.booktrope.com

– Discounts or customized editions may be available for educational and other groups based on bulk purchase. For further information please contact info@booktrope.com