Close but no cigar

A couple of weeks ago I put up a post about the way people in the indie writer community go out of their way to help each other out – The Free Economics of the Indie Author World.

In the last week, I’ve had the opportunity to see first hand the amount of time and energy the community is prepared to put in to support one of their own.

Last week I had the good fortune to have my novella, Doodling, selected as a semi-finalist in the Goodreads Choice awards, humour category. I’m not quite sure how it happened. I was barely even aware that the awards were on. I cast a vote for myself in passing (why not?) and then promptly forgot about it.

So I was well and truly amazed when I received an email from Goodreads telling me my book had been nominated. I couldn’t believe it. There was my little, self-published book, up there on the page with books by names such as Tina Fey, Ellen deGeneres and Penn from Penn and Teller. Pretty mind-boggling for me. I felt like I really was in the big league now.

So, the first thing I did was I went to the community, and my friends on Twitter, Facebook and Goodreads, to see if anyone was willing to help out. I don’t have a massive following myself, having only entered the world of social networks a few months ago. But the response was amazing. The support and encouragement really showed me the value of this community.

In particular, I’d like to single out Donna and David Brown who went beyond the call of duty in their support, even going so far as to: 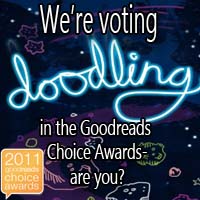 In the end, Doodling didn’t make it to the final round of the awards. Still, I feel like I’ve really achieved something just by being nominated. And that could only have happened because of the support I received. So I’d just like to pass on a big Thank-You to all the members of a community which I’m really honoured to be a part of.
And if you want to see more of the extraordinary work Donna does promoting indie writers, check out her amazing event, Adopt an Indie.