As anybody who follows my blog or writing will know, over the last month I’ve been participating in the Discover Fantasy blog tour. Today I’m really thrilled to have one of my co-tourists, David Brown, here. I’m particularly pleased as about a year ago, one of my very first guest posts ever was at David’s blog. Today I’m glad that I can finally reciprocate as I interview him and find out more about his work and what writing fantasy means to him.

And once you’re finished reading, don’t forget to go to the Discover Fantasy site to enter the draw for a $100 Amazon gift card.

D-LC: How would you define fantasy? What is it about your books that makes them fantasy? 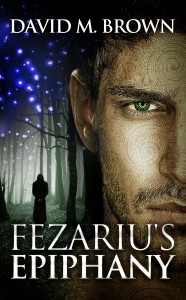 DB: I once saw a great definition of fantasy which I will never forget. Fantasy is defined as the impossible, anything that is beyond human capabilities. Dragons breathing fire or wizards casting magic are just some of the popular elements of fantasy, but they are the more traditional aspects whereas fantasy as a genre is growing and broadening rapidly.

The Elencheran Chronicles fall under the fantasy genre because the world of Elenchera is one of magic and a myriad of races such as the animal headed valkayan race or the Kaluminians, with glistening green eyes. In its construction, I tried to make Elenchera as fantastical as possible before building the detailed world history and giving it some realism back.

D-LC: Did you deliberately set out to write a fantasy story or did you just write the story you wanted to write and that’s how it turned out?

DB: When I decided to start writing I always had fantasy in mind. I love the work of Tolkien but it was the RPG series Final Fantasy which inspired me to begin writing. Those games seem to blend fantasy with some sci-fi elements. Their worlds, characters and storylines are so intricate and fascinating. They led me to other influences such as Norse mythology and suddenly the possibilities for writing seemed endless. Although I write fantasy I try to do so in a different way.

D-LC: How do you think the worlds you create and the stories you write reflect you as a person?

DB: My love of history is prevalent in the world of Elenchera. Events from our own history have been recreated in Elenchera and anyone that looks through the history will see some similarities. The age of discovery that begins in the Twelfth Shard for instance has lands in East Elenchera discover those in West Elenchera and imperialism and colonialism soon follow. This is, of course, 1492 when Columbus discovers America and everything that happened after that.

Elenchera is also in tune with current affairs. I’ve had thirty years of my life so far and along the way I have realised that in general, for all of us, life is hard. Some prosper while many struggle and I think I wanted that degree of realism in conveying Elenchera. This isn’t necessarily the sort of world you would want to escape to like say Narnia or Wonderland. It’s a hard place to live and survive in. My best friend once said to me every character in your books usually dies. He’s partially right!

D-LC: One of my favourite aspects of fantasy is the freedom it gives you with characters. How do you come up with your characters? 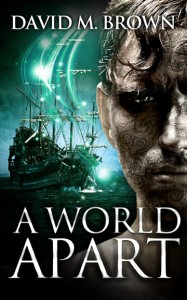 DB: My characters emerge from the historical contexts of a particular novel. In Fezariu’s Epiphany my initial desire was to write about the Merelax Mercenaries and to do that I needed a character to join them and live their way of life. Fezariu was a simple character initially but over time he developed, became more complex with a troubled past that became the central focus of the novel, eclipsing what I had originally intended. In a future novel, Ansel’s Remorse, vampires come to the world of Elenchera and in the history I wanted to know of their origins and soon found they stemmed from one character – Palatine. The novel explores Palatine and his best friend Ansel, their rise and fall before an epic war between vampires and the rest of the world.

I suppose I also have Jodi Picoult moments where I imagine personal dilemmas for characters. That became the premise for A World Apart, having three childhood friends separated for ten years and when they’re reunited they are enemies. A very simple and basic theme but I start small like that and build the characters around it.

D-LC: If you were to become a character in your world, who would you be?

DB: It would probably be Norman Verne who is the first travelling tolderian salesman. The tolderes are a canine-headed race and Norman Verne leaves the island of Lemanto one day and spends decades travelling the word, buying, selling and trading goods. When he returns home he begins a new craze in Lemanto for travelling salesmen. The freedom to travel our own world like that without care or responsibility must be truly amazing and that’s what draws me most to Norman Verne I think.

D-LC: What do you think readers look for in a fantasy hero? And what about a villain?

DB: I think heroes need to have some flaws and weaknesses to make them more endearing. The Lord of the Rings wouldn’t have worked as well if Aragorn had been the Ringbearer. Heroes have a great sense of good and right, often teaching others who are seemingly superior the right way to look at the world. They are good at uniting the most divisive of groups even though they might not necessarily excel as the overall leader.

Villains are easier to write for me. They are often egotistical, violent and cruel with no real sense of morality. The pursuit of power often drives villains. They are also greedy and malevolent. Sometimes villains come from a harsh background which has developed them as adults but many simply have a pre-disposition to being evil. I think if a writer really writes a villain well then the reader will despise them and be hoping they get their comeuppance. If you inspire such feelings in your readers then you’ve done a great job with your book.

D-LC: Describing a story as just a fantasy can be a bit restrictive. What other ways can you describe your stories?

DB: There are different types of fantasy so I suppose Elenchera novels could be epic fantasy in the case of A World Apart but a shorter novel like Fezariu’s Epiphany might be General Fantasy. Perhaps collectively the Elencheran Chronicles could be known as Alternative Fantasy. I’d go for dag-lit but a great indie author I know beat me to that one!

Thanks so much to both of you for joining me today and all the best for your books. 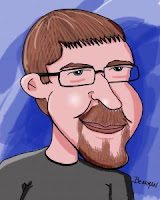 David Brown could be considered a fantasy fanatic, especially since he has spent the last 10 years developing a 47,000-year history for his fictional world of Elenchera. When converting his obsession into literary form, David commits himself to a rigorous writing and editing process before his work can meet his approval. Combined with the critical eye of his wife and a BA Honors in History and English, David’s dedication leads him to his goal of inspiring readers through heartfelt stories and characters.

Although David is inspired primarily by fantasy fiction, he also finds his muse in the form of anime, world cinema, history, and biographies. His own books, Fezariu’s Epiphany and the in-progress A World Apart, combine aspects from worlds both old and new into compelling tales of a world not soon forgotten., David himself certainly does not lack a spirit of adventure; in fact, he left his job in 2007 in order to spend a month traveling. Second only to meeting and marrying his wife, David counts this as one of the most amazing experiences of his life.

2-year-old Fezariu thought his mother died when he was little, but when his beloved stepfather dies the boy discovers she is alive and well – and working at the most famous brothel in all of Elenchera. When she cruelly rejects him it’s more than he can bear, and he runs away to join a band of ruthless soldiers for hire. The Merelax Mercenaries will fight for anyone who can pay them, no matter the justice of the cause.

Fezariu grows up among the soldiers and becomes one of them. He thinks his time with the mercenaries has hardened him. But a campaign in his old home town pushes him too far, and he discovers what really happened to his mother. Maybe there are some things money shouldn’t buy… and maybe it’s time Fezariu took his revenge.

Demetrius makes his first mistake when he lets his best friend Halcyon marry Eleyna, the love of his life, without saying a word. On the day of the wedding, he walks away from the Elencheran town of Dove’s Meadow and joins the army.

He makes his second mistake when the pirate Black Iris tricks him into letting dozens of men, women and children die in a fire. Demetrius is imprisoned in grief and disgrace.

But he can atone. The Black Iris is dead. The Ivory Rose has risen to the top of the pirates and is leading brutal raids on the coast. If Demetrius can capture and kill her, he’ll win his pardon.

And then Demetrius discovers the Ivory Rose is Eleyna. He must decide which will be his third mistake: Losing his last chance at  apardon, or destroying the one woman he’s ever loved.