Everyone in Publishing is (Slightly) Insane Right Now: Guest Post by JC Andrijeski

Today I’m pleased to have another visitor to Dag-Lit Central. JC Andrijeski has popped in, all the way from the foothills of the Himalayas, with an interesting take on current attitudes to book marketing. Take it away, JC.

Everyone in Publishing is (Slightly) Insane Right Now 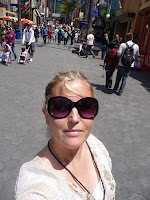 People are totally going nuts in the new world of publishing. As my Aussie friends would say (there’s really no good equivalent in American-speak), tons of people have totally lost the plot, and are running around in a near-hysterical panic in the midst of all of these changes.

This truth only sunk in relatively recently for me, as I kept my head down pretty much for the past 12 months, focusing first on getting myself in a position where I could focus more on the writing, and then by actively, well…writing. It’s allowed me to observe some of the craziness without getting too attached. I basically told myself I’d join the melee once I’d built my inventory enough to make it worth my while, and until then I’d watch all of the freaking out from a safe distance.

Then Christmas loomed on the horizon, and I began to feel that pressure like most writers and small publishers I know. Got to GET IT OUT THERE, got to be seen, got to get freebies and specials up on Amazon, Twitter my brains out, network, give things away, come up with a gimmick, drive everyone I know on Facebook totally bat crazy, join in promotions, pay for ads, and, and, and… (can you feel the hysteria building…?)

All of a sudden, I found myself back trying to navigate that same scarcity mindset that sent me packing from corporate culture in the first place. You have your gurus telling you “there’s only one way to do this.” You have the fearful newbies, convinced that they only have this tiny window of time to get famous (always off their first book, or maybe their second). It’s implied of course, that if they miss that window, then it’s all over for them, they might as well go back to flipping hamburgers or mindlessly entering data into spreadsheets for some insurance company in Akron, Ohio. You’ve got people willing to treat their work like it’s a worthless, plastic trinket in the “we’re about to chuck this crap out” sale bin at Wal-Mart. You’ve basically got people reacting, reacting, reacting…and not really stopping to think if all of this fear and the mindless (often lemming-like) activity it produces is really getting them anywhere.

Then you’ve got the old pros in this business watching all of this and shaking their heads in disbelief.

Don’t get me wrong. I totally get the fear. I’ve been suckered in by it more than once myself. I’ve had that nausea-inducing feeling of dread that if I somehow “miss my chance,” I’ll be confined to the annals of obscurity for now and evermore. We’re all susceptible to this, especially at the beginnings of our careers, when we haven’t ridden through enough of these crises to be able to see ourselves or our work clearly.

But the truth is, it’s all an illusion. It’s just not real.

The only thing you can really control as a writer is whether or not you are writing. Sales? Yeah, you can play the Amazon lists lottery, learn all of the algorithms by heart and pump your books up temporarily from a clever gimmick or see them sink like a stone from a misstep. But as Kristine Kathyrn Rusch points out so astutely in this post, playing those games is really short-term thinking, and ultimately will either lead to disappointment or a somewhat deluded sense of “what works” (and likely, eventually, disappointment, when it doesn’t work the next time around)…but not to a realistic approach to building a real career as a fiction writer.

Sadly, I saw this same sort of mentality in the short-term thinking of most corporate environments…grandiose “guru-izing” and “wonder child” status for those who championed whatever flavour of the month happened to bring a bump in sales that made the quarterly earnings sheet look good for five seconds on some CEO’s desk. Having worked at fairly high levels in such environments, I can tell you how utterly meaningless those quarterly statements are in terms of predicting the long-term health of most companies. In fact, you can often get those bumps by actively undermining the long-term health of a company in which you are operating. Kind of like how you can get those bumps by, say, spending a whole month (or 2 or 3) doing nothing but promoting your first book ruthlessly while not writing a single solitary word of new fiction.

The thing is, a bad cover can be fixed pretty easily and quickly. Bad content takes a lot longer, and is only improved by putting in the time and writing more books. You’ll never get that month of writing time back, so you’re probably a lot better off not freaking out about how your stuff looks from the marketing angle, and focusing on writing new stories that people will really want to read. I know for a fact that my marketing presentation needs work. I’m fixing those things as best as I can while I learn the business, but the only time I truly feel I’ve lost the plot is when I realize that all of my creative energy is going into this, rather than writing the next story.

That’s not to say you shouldn’t know your business – of course you should.

But I never want to do what 90% of the failing American corporations I’ve worked for have done, and forget what my actual product is. My product isn’t a snazzy cover. It’s not being a social networking goddess. It’s not how many Amazon lists I can jump on and off and how quickly, or how high I can get my book to rank on the free Kindle rankings.

That stuff for me is all noise, for the most part. I’m experimenting here and there, sure. I’m networking with other writers and getting some great ideas from things they’ve tried, and I’m dipping my toe into areas that seem to align with my strengths, interests, or just business sense and logic. But I never want to buy into the hype that you have to follow some formula involving cheap promo gimmicks to gain a loyal audience.

At the end of the day, the only thing that matters is how good I am at telling stories. There are enough bad novels out there that sell a few thousand copies in a month because of clever marketing, either by an individual or a major publishing company. I don’t want to be one of those writers. I want to be around in ten or thirty years because I keep getting better at my craft, and because my career and income built through a real word of mouth fanbase.

Would I love to make a few grand a day in sales? Sure, I would! Any writer who says they don’t care about this is a liar. Even if they don’t need the money, writing is a conversation, and nothing is more boring than a monologue…especially to the one delivering it.

But I honestly don’t think the way to get there, at least for me, will be to do a lot of handwaving and hysterical jumping up and down to get noticed. Maybe that really does work for some people, and more power to them, I mean it. But for me, I need to focus on the writing, and learn the rest of it as I go. For me, all of that stress and fear is counterproductive…in fact, that way lies madness.

Don’t believe the hype that there is only one way, and that it requires you to magically transform into Tony Robbins or Suze Orman overnight. Just keep writing. Replace covers and blurbs and marketing packaging as you learn. Don’t live in fear. Seriously.

And have more faith in yourself. Give things time to grow, don’t expect some crazy overnight success or bash your head into your monitor when it doesn’t happen. Those do happen, yes..those are the lottery winners. But you up your chances exponentially for those types of opportunities by writing more and giving more work to the public to possibly fall in love with. It drives me crazy when I see how many people give away their 200K word novel for 99 cents because they’re afraid they will be “missed.”

This is a wonderful time to be a writer – believe that, too. We have options now. We can write what we want and still make a living…especially if we allow ourselves to get any good at it. We can find our niche audiences, no longer forced to find something that a corporate sales head believes will meet that elusive “mass appeal” criteria for all readers, all the time. We can work for ourselves.

To me, that freedom to be able to write the stories I really want to write makes all of this craziness and uncertainty and the fear completely worth it.

JC Andrijeski is a bestselling author who has published novels, novellas, serials, graphic novels and short stories, as well as nonfiction essays and articles. Her short fiction runs from humorous to apocalyptic, and her nonfiction articles cover subjects from graffiti art, meditation, psychology, journalism, politics and history. Her short works have been published in numerous anthologies, online literary, art and fiction magazines as well as print venues such as NY Press newspaper and holistic health magazines. JC currently lives in India, in the foothills of the Himalayas in Himachal Pradesh where she writes full time. Please visit JC Andrijeski’s website at: jcandrijeski.com or her blog at jcandrijeski.blogspot.com.