Hooray, today I’m participating in a cool event to celebrate the launch of fellow Booktrope author Terry Persun’s new fantasy novel, Gargoyle – book four of his Doublesight series. To commemorate the event, Terry has taken over my blog for the week. And keep an eye on his website – http://www.terrypersun.com/ – you may just see a little something from me. 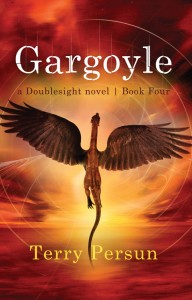 Book four of my Doublesight fantasy series just came out. Like most books in a series, it’s nice if you can read them in order, but you don’t have to. Gargoyle is one step further from that idea. The novel focuses on the son of main character from the first three books, Zimp of the crow clan. The book begins where Korlan, Zimp’s son, doesn’t even know what type of shape shifter he is. Here’s a short passage from the beginning of the novel, where he’s trapped in a cave.

Korlan closed his eyes again, but this time it didn’t help him feel any safer. He couldn’t inch backward, and couldn’t inch forward. His arms were tight to his sides and his body had somehow swollen to a size that jammed itself where he had stopped. And the light before him was dimming, his only link to the outside already turning to the color of an eggplant. He struggled as he clenched his fists and tried to shove backward. Then he wriggled and swung his head, banging it against the rocks. He flailed and kicked his legs, the only part of him that felt as though they had room to move. “Suma! Please, please, please get me out of here…I can’t, I just can’t do this.” He kicked a few more times, then bent his knees the best he could, but his movements made things worse. He thrashed. He tried to turn. Dirt showered down over his head. Grit and rock pierced the skin on his knuckles and the top of his head as he assaulted the inside of the cavern. His forehead cracked against the ground, and when he reacted by jerking his head back quickly, he hit the ceiling hard. It dizzied his thoughts for a moment.

Blood rushed to his face, and he noticed an unusual sensation course through him, painful and yet welcome. His body felt larger than he knew it to be, too large to fit in the cavern, too large to survive in such a tight space. The crushing sensation increased as he beat his head against the ceiling, and attacked the walls with his twisting shoulders and arms. What was happening? Was he suffocating, even though the open air stood only a few feet in front of him?

Starting on September 1st Doublesight will be one of Amazon’s Kindle Worlds (https://kindleworlds.amazon.com). Join me, by writing a short story (5,000 to 10,000 words), novella (10,000 to 50,000 words), or novel (over 50,000 words) and get it published. I need to have a handful of stories ready by the September 1st, 2015 launch date, so if you’re interested, please contact me for more information. Any characters you create are yours to keep. Let’s have fun together. TerryPersun@gmail.com

My Best in Fantasy Review:
http://bestinfantasy.blogspot.com/2014/08/doublesight-terry-persun.html

Terry Persun has been writing and publishing short stories and novels since the early 1970s. He has been the recipient of seven novel and poetry awards over the years, including the Star of Washington Award, a Silver IPPY for historical fiction, two Book of the Year finalist awards in the science fiction category, two finalist awards from the USABookNews International Book Awards (one in science fiction and one in historical fiction), two poetry chapbook awards, and a Jeanne Voge Poetry Award. Terry writes in a variety of genres including science fiction, thriller, mystery, and mainstream fiction. He is a respected keynoter and speaker at libraries, writers’ groups, writers’ conferences, and universities across the country. Terry has an MA in creative writing from SUNY Stony Brook.

And now comes the fun bit

As part of this event, a number of authors are providing an opportunity to win copies of their books (including my comic fantasy, Magnus Opum). In order to participate, just enter the rafflecopter below.

Thanks for sharing the exerpt! Good to see fantasy fiction writers working together.