Today I’m delighted to announce another visitor to Dag-Lit Central. Darlene Jones will be talking about her novel, Embattled, and how it stands out from the crowd. So take it away Darlene…

In part, Jonathan Gould defines Dag-Lit as something that: “is hard to fit into a box and likes to find its own space, is full of surprises, but always works out in the end, and is serious, but doesn’t take itself too seriously.”

It is in the spirit of Dag-Lit that I write the following about my first novel.

You’ve written a book and the first question everyone invariably asks is, “What’s it about?”

“Um… er… it’s…” Who knew defining your work would be harder than writing it? “Well, it’s not a thriller, or a mystery, or a bodice-ripping romance.”

“Well, what’s it about?” You sense an edge of impatience creeping in.

You frown in thought. How to describe a cross-genre novel? It’s not easy. And where is it written that your creation has to fit some preconceived notion of a novel genre anyway? You take a deep breath and plunge in. “It’s the story of a woman whose life is taken over…” No, that’s not going to cut it.

You try again. “It’s an adventure slash love story with a bit of “soft” sci-fi magic, about a woman who is chosen to “fix” stuff in the world, and about the two men who love her.

Frowns tell you your inquisitive audience doesn’t have a clue as to what you’re talking about. You can’t fit your novel into a “genre” box. It’s a unique mix that works with serious aspects, but a touch of humor too.

Suddenly, inspiration hits. For the men, you say, “sci-fi adventure.” And for the women you say, “love story with a bit of magic.” Then you hope like heck they’ll be curious enough to buy it and hope like heck you’ve written it well enough that they’ll like it, want to buy the whole series, and will tell all their friends about it, word of mouth being an author’s best friend. 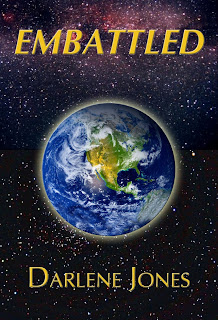 Em sits at her desk, her hands soaked in blood. No wounds, no pain, and no idea where the blood came from. The reds and greens swirling across her computer screen scream jungle battle. She’s certain she was there. Fighting through the jungle to stop a battle, storming into a courtroom to save the accused, facing a firing squad of armed ruffians…
Are her “three wishes” coming true?

And, Yves? He is there to arm her with special powers, to send her into battle, to watch over her. His first assignment as a supreme power is to clean up the mess on Earth without going down there himself. Meeting his superior’s expectations is a huge challenge. Falling in love with Em threatens to ruin everything. 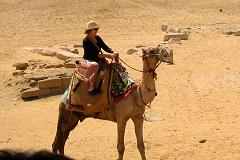 A long time ago, I lived in Mali. Every single day, I wished I could wave a magic wand to relieve the heart wrenching poverty. My experiences there led to the writing of this story. Some aspects of EMBATTLED reflect my desire to wave that wand and make the world a better place—if only wishes could come true. And of course, every novel needs its love story, so along with the sci-fi magic, I’ve added the requisite romance.

I now live on Vancouver Island, Canada and spend winters in Mexico. I write, read, and body board when I’m in Guayabitos. I love my granddaughter, the views of the ocean from my desk, and chocolate, which should be its own food group.