It’s always a pleasure to have visitors here at my site. Today I’m delighted to introduce fellow Booktrope author Kelly Hall who will be talking about her Light Keeper novels. So take it away, Kelly.

How my story stands out from the rest. 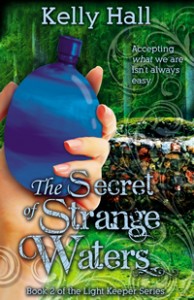 When I set out to write the Light Keeper novels I wanted to create something different. I think that is what most authors want is to find a fresh spin on a subject or to create something totally new. At the time, I had just decided to try my hand at writing and I was reading lots of vampire books. They seemed to be everywhere and so popular and every idea I had seemed to have been done in one way or another. I wanted to write something that was paranormal because I love paranormal books. I also knew that I wanted to create my own characters that were gifted and had a special lineage and powers. It has always fascinated me how some people claim to have abilities and I believe some actually do. I considered the idea of this community of specially gifted people who were all blessed with these gifts naturally by God, but then something happened that degenerated their gifts leaving what we see today, where some people have clairvoyant or psychic ability that they can’t understand or explain; and also the idea of how some of them tend to keep their abilities secret and cope with it throughout their lives. They go about their day to day as if it isn’t what they are. I always thought that was interesting and decided to base my story around that idea, and that is how I created Light Keepers, which I hope stands out as something unique.

I think another thing that stands apart is the family dynamic and the situation that the family has been put in because of a tragedy, which is in this case a hurricane. I myself went through the experience of two destructive hurricanes and saw how they not only impacted my life, but my whole community and how it left a lasting imprint on everything from the landscape to the people affected.

In the story, Lily moves to a new home on the most haunted road in the area, which is known for its folklore and the mystery of a ghost light. It’s actually based on the real-life ghost road legend of the Bragg Light of Bragg Road, which is close to my hometown. I think that makes it stand out as well, since there is a little real life folklore weaved throughout the series. The Secret of Strange Waters which is book two, is loosely based around the mineral springs and artesian springs that are found in my area as well. In the 1800’s people would come from all around to bathe in and drink the water believing it had special powers, and in the book it holds a special connection to Lily and her powers.

As for more of the family dynamic, I wanted to do something that was not traditional. I wanted the parents to not be married, and that’s not because I don’t support marriage, because I do and the parents do get married, but in the world today, families are so blended and mixed up and that’s okay. Families are made up in so many different ways and this is the start of a family coming together and these kids, who don’t even know each other before being pushed in a home together, they fall for each other, kind of hard and fast, but I think that’s how young love is. I also wanted to base their beginning on how sometimes we love the things and people that aren’t necessarily who we are meant to be with and who are not necessarily good for us. But the heart wants what it wants which I hope makes for an interesting conflict for the readers. So I’m really hoping the readers will enjoy this series as something different that stands apart from other stories.

Kelly Hall was born and raised in Southeast Texas, and lives in a small town just a stone’s throw from the ghost road where her Light Keeper series is based. When she’s not busy writing or spending time with her husband and two sons, this self-proclaimed creative junkie dabbles in many different forms of art, including cake decorating and mixed media. Learn more about Kelly at authorkellyhall.com

Thank you very much for featuring Kelly! Great post!

Thank you so much for the feature!

My pleasure. Always great to have guests.