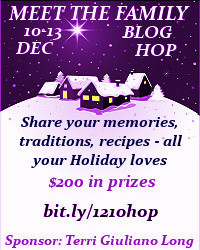 At the moment, I can barely keep still. I’m hopping

and hopping so much I hope I don’t end up falling flat on my face. I guess if I do, it won’t be the first time.

Anyway, to clarify thing, today I’m participating in another blog hop, my second on three days. This time it’s the meet the family blog hop sponsored by Terri Giuliano Long, author of In Leah’s Wake.

The topic of this blog hop is family holiday traditions. To be honest, we’re not a particularly tradition-focussed family – we tend to make things up as we go along. But I thought what could be fun was if I imagined a holiday celebration in which some of my fictional characters came along. Now that could be very interesting.

First of all, there’d have to be Neville Lansdowne, from my novellas Doodling and Scribbling.  Neville would probably just wonder in, completely lost after trying to get somewhere else. He would wonder around, looking somewhat dazed, and try to make polite conversation while not particularly understanding what anybody else was saying. Come to think of it, Neville would be acting pretty much the way I act at a party. Funny that.

Then there could be Kriffle, the main character from Flidderbugs.  Mind you, Kriffle is actually an insect so he probably wouldn’t be having much fun. He’d be spending most of his time avoiding fly spray (especially if it’s a good old Australian celebration). I guess things aren’t looking too promising so far.

I think it’s the characters from Magnus Opum that would really liven things up. For a start, we’d have to have Magnus Mandalora and his Kertoobi friends. They’d bring the pflugberry wine and the pflugberry pies and pretty soon we’d all be happily engaged in a big pflugberry food fight. Entertainment would be provided by Shaindor and the Cherines who would regale us all with never-ending songs – come to think of it, we may want them to end after a while.

We’d have to have a contingent of Pharsheeth to liven the party up. Who else would keep dancing all through the party, and probably for the next couple of days as well – we probably won’t actually be able to get them to leave. And we’d definitely need a few Doosies around, to spread all the gossip about what went on and who hooked up with who, even if most of it ends up being completely made up.

The more I think about it, the more I reckon my fictional friends would make a great party crew – but then again, that’s what they’ve been doing inside my head for quite a few years now, so I guess I should know.

All the best and have a great celebration, whatever it is that you do.