New release – Through the Flame

A have to begin this post with a big apology. For the last two weeks, you have heard nothing from me. This feels like a terrible lapse. Since I began my blog back in 2011, I don’t think I have ever skipped two weeks. As someone who is more than a little on the anal retentive side, I do feel terribly guilty about it. I do think I have a reasonable excuse though. Partly, it’s because I’ve been away with the family. Partly, it’s because unfortunately the year has not begun in the way I’d hoped and I’m currently managing a few issues. I may say more when things are resolved.

But now that I am back, I do have a grand announcement to make! 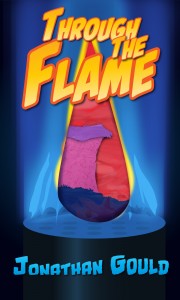 Finally, after close to ten years of development, and lots of rabbiting on by me, my new novel has been released. The title is Through the Flame and it’s a…well it’s sort of like…it’s actually kind off…

Well, you know me. I’m never likely to write anything that can be clearly characterised. I suppose it sort of fits into young adult or middle grade. The main character, Nicola, has just started high school so she would be 12-13 years of age. And she travels to a strange alternative world (through a mysterious Bunsen burner if you must know) so I guess that sounds a bit like fantasy. Some of the stuff that happens to her in this world (Enderopia) is a bit funny and most of it is very strange. Some bits could maybe be thought of as a bit satirical, but then again maybe not.

I’m hoping that ultimately it’s just a whole lot of fun. I suppose you’ll have to read it to find out. At the moment, it’s only available on Amazon but I’ll likely get it out to other sites in a couple of months. For this first week, I’m making it available for the special bargain price of 99c, so please do yourself a favour and check it out.

Hopefully you’ll have as much fun reading it as I had writing it.