The Girl in the Window – new release by Valerie Douglas

As the year winds down, I’m pleased to be able to announce some more exciting news from the Alexandria Publishing Group. Our founder, Valerie Douglas has just released her latest novel, The Girl in the Mirror, and it’s sure to be a ripper. But rather than let me go on about it, I’m really pleased that Valerie has popped in to tell us about it directly. So let’s hand it over to her.

The Girl in the Window 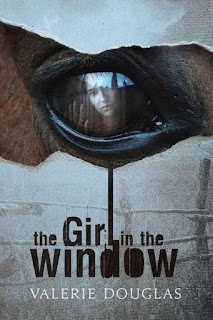 In a way, The Girl in the Window is the celebration of the life of someone I never met, but who still had a huge impact on me. According to his Facebook page, his name was Spirit Wolf Wakta. He made jewelry by hand. I don’t even remember when we met, or how, but somehow we began talking. I was struggling in my writing career, not finding satisfaction with my publisher, experimenting with this new thing called Indie or Self-published writing. My writing had stalled. I had just finished the enormous task of editing one of my epic fantasies. It had taken a whole month. My husband was angry and frustrated at my fixation, I was tired, discouraged and seriously considering giving up. I didn’t even have any new ideas for stories.

And that terrified me.

Spirit Wolf and another friend I knew as Mateo kept encouraging me to chase the dream.

Then one day Spirit Wolf sent me this picture, along with his impressions of it. I hadn’t asked him to do it, and if it had been anyone but him, it would have annoyed me and I would have ignored it… but you see, I’d seen his work. He’d sent me one of his necklaces. Packed with it was a seashell he’d found walking along the shoreline near his home.

The picture was simple – a girl standing by a window, with the faint impression of a horse visible through the glass. There was a pensiveness to the portrait.

I looked at the picture, at his thoughts, and it resonated with me personally. I started writing. Some stories come in a great rush, some flow, and some are like pulling teeth. The Girl in the Window flowed, but not easily. The draft was rough, but good. I struggled with including a few scenes – which I’d later add.

Like many authors, I knew I had to step away from it, from the emotions that had poured out of me, and so I put it away.

First, though, I sent the rough draft to Spirit Wolf and Mateo.

A year went by, a little longer. I thought I’d have more time. The truth was that I was a little scared. The Girl in the Window was so different from anything else I’d ever written. Sort of Seabiscuit by way of Nicholas Sparks. I can be as insecure as any other writer. But they say that you should do what scares you. Spirit Wolf died before he ever saw The Girl in the Window come to life. He had cancer. I’d no idea. He’d probably known he was dying even as he gifted me with The Girl in the Window.

Even then, I wasn’t ready. As I grieved privately for the friend I had lost, but had allowed to grow too distant, I still wasn’t ready.

I finished the horror novel I’d been writing – another exercise in doing things that scare you – and needed something to clear my mind.

Finally, I picked up The Girl in the Window. For some reason, it was important to me to finish it by Christmas. I didn’t know why.

The Girl in the Window is available now from Amazon.com.